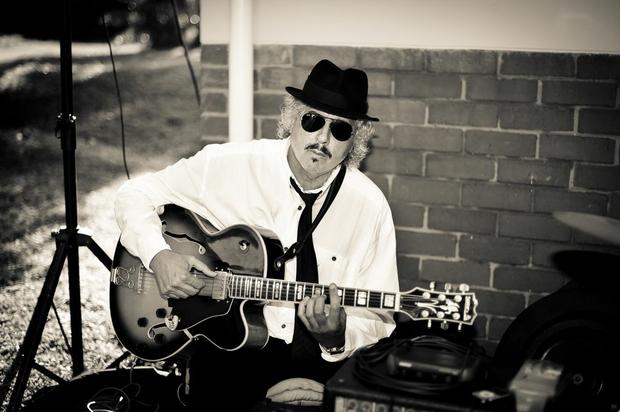 On Guitar and, when the occasion arises, vocals we have Gerald Sloan aka ‘the Sloan Ranger’. Gerald is the musical powerhouse of the band, bringing with his formidable world class jazz guitar skills and vast musical repertoire a level of understanding and experience that keeps the band on a steady learning curve.
Gerald has been playing professionally since the 1980’s locally and internationally, in intimate jazz lounges and jazz festivals , on stage and on TV and with some of the big names of SA jazz including; Lional Pillay, Bheki Mseleku, Melvin Peters and Joe DeLew to name a few. A band leader in his own right he has formed and led a number of very successful bands including; ‘No Strings attached’ and ‘The Gerald Sloan Latino Project’
Gerald Lectured part time at the University of Natal before moving to Australia in 1997 where he worked in the following capacities:
• Solo Guitar and Vocals at The Hilton Hotel – October 1997 to January 1998
• Guitar for local band “Imagine That” at the following venues:
• The Stage Restaurant in Fitzroy – February 1998 to May 1998
• Wangaratta Jazz Festival – November 1998
• Echuca Jazz Festival – January 1999
• Solo Guitar and Vocals The Oak Room, Crown Casino – February 1999
• Solo Guitar and Vocals at The Pacific International Hotel - July 1999 to October 1999
• The Duck Restaurant, Crown Casino - November 1999 to May 2000
• Sofitel Hotel, June 2000 – September 2000

Gerald has four original cd’s to his name and was adjudged winner of the YAMAHA, SHEER SOUND and KAYA Fm guitar competition on the 27 March 2002. His music can be heard on P4 Radio.
In 2006 Gerald teamed up with Daniel and Logan at their regular gig at then ‘Manna’ and the rest is history.

If Gerald cant play it; aint nobody can!