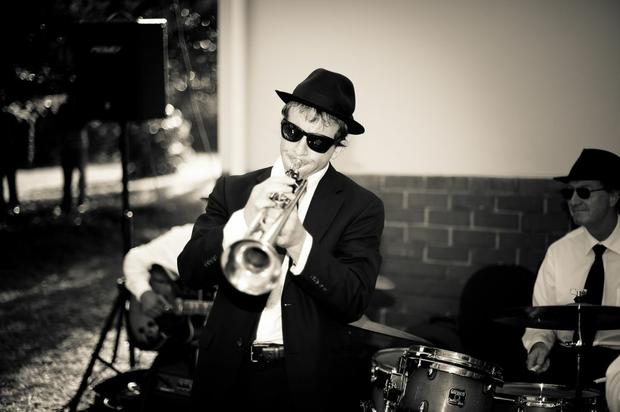 Daniel Sheldon on trumpet and percussion is the founder and frontman as well as webdesigner, graphics unit and manager/agent of Beat-Route. He has an B.Prac Degree in Music From UKZN and N Dip music from D.I.T and used to lecture Music Theory and Aural Perception at UKZNs Jazz foundations course. Currently teaches trumpet at DHS in the Chris Seabooke Music Dept under Natalie Rungan.
Daniel has been instrumental in positioning Beat-Route on the local entertainment and corporate circuits as well as somewhat further afield. He has built up the band both in terms of a brand and in his small part of the unit in terms of the repertoire and sophisticated appeal and presentation.
Musically he has had the privilege of playing alongside some of the finest musicians in KZN over the seven years of his professional career including; Neil Gonsalves, Demi Fernandes, Zoe ‘The Seed’ Masuku, Nosihe Zulu, Melvin Peters, George & Debbie Mari, Nduduzo Makathini, Ildo Nandja, Tom Hare, Burton Naidoo, Susan Barry, Vincent Mthethwa, to name a few.
Daniel has featured with: UKZN jazz Big Band and Salsa Band on numerous occasions at the year end Jazz Jol functions at the jazz Center UKZN, Brazilian Groovers Napalma at the Awesome Africa music Festival 2007, as well as with Australian rock Band Veeva Feeva on the KZN leg of their SA Tour 2007, founded ‘DDT’ together with Funk Bass player virtuoso Dan Wilson and Norwegian pianist and electronic wizard Thor Kvande, also featured on Creeper’s 3rd Album ‘TRIP’ and a DJ collaboration cd produced by Dan Wilson. In his early years Daniel worked extensively with electronica sound construktor Captain Asthma and Brendon Bussy on some experimental collaborations as well as with Felix Laband. Early gigs include ‘Will’s Blues Band’ at Splashy Fen around 2003. He also Played with the Durban City Orchestra for 2 years.
Daniel was also featured with Jazz Legend Joe DeLews revival alongside Philani Ngidi, Dan Chirbolli, Paki Peole and Shelly Mann at the Zulu Jazz Lounge and played in Durban Salsa group ‘Manteca’ with John Drace, from the USA.
In earlier years Daniel coordinated Bean Bag Bohemias jazz sundowner trio jams from November 06 - April 07, and the Jazz Cocktail evenings at Bertoua 2012-13 as well as the Jus Jazzin rounds of Jazz as part of the Ballito Prawn and Jazz festival. Daniel has also Corodinated the music and all pocket entertainment for the annual Trail of Lights Festival in Durban at the Botanic Gardens since its inception.
Daniel has founded a couple of bands over the past years including the ‘Daniel Sheldon Quintet’, ‘Turning Point’ ( co founded with Nduduzo Makathini and Tuto Motsepe ) a traditional jazz 5 piece which played regularly at the BAT center on Sundays until the change of management and dispersal of the members. And ‘AfroCentric’ a 5+ piece Afro jazz and groove band which enjoyed some success at Zulu Jazz Lounge and Moyo.
Daniel also assisted with leads, design and creative strategies for the KZN All Stars Big Band where he enjoyed playing in the trumpet section.

Daniel also paints, draws and enjoys a bit of webdesign and storyboarding for the movies.

Daniel also created, developed and maintains the content and graphics on this site.
Check out his art/illustration/story-board work at http://speednperspective.withtank.com (still under construction)